This Tom Cruise Maverick Brown Flight Top Gun Jacket is a replica of the jacket that Maverick wore in Top Gun. In the film, Maverick Mitchell is a naval pilot who goes to attend Top Gun which is a Naval Fighter Weapons School. A day before the Top Gun, Maverick then also has a conversation with a woman named Charlie whom Maverick later learns is a Top Gun instructor. Charlie than also gets interested in Maverick ( Tom Cruise ). He then also becomes a rival to the top student named Iceman who also considers Maverick’s performance dangerous. At the first day of training, Maverick performs recklessly and also breaks two rules. Further, he also begins a relationship with Charlie. In the end, after a series of action, Maverick then expresses his respect for Iceman and reunites with Charlie.

This Top Gun Maverick Jacket is a fabrication of top-notch quality PU Leather or Real Leather. It consists of an inner stitched viscose lining to keep you comfortable. Its specifications comprehend a shirt style fur collar, rib-knitted cuffs, rib-knitted hemline, patches at the front, sleeves, and back, and front zip closure; furthermore, two flap pockets at the waist and two inside pockets are also present.

1) What are some of the famous lines from Top Gun?

It’s been more than 30 years since Top Gun was released, and the movie has delivered a few such types of badass quotes that they never get old. Some of them are as follows:

2) Why did Jester go below the hard deck during the contest?

As soon as Jester realizes that Maverick is going to win, Jester also goes under the deck following Maverick.

3) Who turned down the role of Charlie in Top Gun?

Charlie Blackwood was one of the major characters and Maverick’s love interest in Top Gun, which was played by Kelly McGillis very beautifully. However, the role was initially offered to Ally Sheedy, who turned it down because she thought no one would be interested in watching a movie about fighter pilots.

4) Which aircraft carrier is used in the Top Gun sequel?

USS Abraham Lincoln aircraft carrier was used during the filming of Top Gun sequel for the shooting of various flying sequences in the movie.

5) Where was Top Gun filmed?

Various sequences in Top Gun were filmed at Marine Corps Air Station Miramar, which is located in San Diego.

6) Who was the villain in Top Gun?

Tom Kazansky, better known by his callsign Iceman, serves as the direct competition to Maverick and the main villain in the movie. The character was portrayed by the legendary Val Kilmer.

NO, Top Gun is not currently available on Netflix.

8) Did Tom Cruise Fly a plane in Top Gun?

YES, Tom Gun did fly a plane during the filming of Top Gun.

9) What plane did they fly in Top Gun?

Various planes were used during the filming of Top Gun, including:

Top Gun was produced on a budget of 15 Million USD.

12) Who died during the making of Top Gun?

Art Scholl was an American aerobatic pilot, and a cameraman who died during the filming of Top Gun, as his camera plane failed to recover from the spin, and crashed in the ocean.

13) Who plays the role of Pete Mitchell in Top Gun?

In Top Gun, the Legendary actor Tom Cruise portrayed the character of Pete Mitchell, who was also known as Maverick in the movie.

Top Gun is an American drama, action film that revolves around a young naval aviator named Pete “Maverick” Mitchell. The movie was released in 1986.

15) Is there Tom Cruise in Top Gun: Maverick?

Tom Cruise will reprise his role as Maverick in Top Gun 2.

16) Is Top Gun: Maverick a sequel to the previous film?

Thirty years after the events of the previous film, Maverick continues to work as a courageous test pilot. However, he continues to refuse any advancement in his ranks. Further, he then goes to prepare a unit of Top Gun graduates requiring an ultimate sacrifice.

19) Did Maverick (Tom Cruise) wear the Brown Flight Bomber Jacket from the first movie in Top Gun 2, as well?

No, instead, in the sequel, Maverick sported a Green Bomber Jacket.

20) What happened to Goose in Top Gun?

During a competition with Iceman, when Maverick goes to chase Iceman and breaks his focus, Maverick’s plane suffers from Jet Spin. Even though Maverick successfully escapes but Goose hits the plane’s canopy and dies.

Even though Goose will not appear in Top Gun 2, but the movie will feature Goose’s son as one of the graduates.

22) Are the jackets from Top Gun 1 and 2 both available at DANEZON?

23) What is the difference between Top Gun 1 Jacket and Top Gun 2 Jacket that Tom Cruise wore?

“There are multiple differences in both the jacket, for instance:

24) What patches are there in Top Gun Maverick Jacket?

There are approximately 17 patches in Top Gun Flight Jacket, among which some of them are USS William H. Standley, Tomcat, VF-1, CVW-2 Top Ten, Seabees, Jacksonville, Power For Peace, Vigilance, USS Galveston, LT.P Mitchell, American Flag, and some others.

25) What patches are there in Top Gun 2 Maverick Green Jacket?

There are not many patches in Top Gun 2 Maverick Green Jacket. There are just simply Four patches in the jacket, which are American Flag, US Navy, VX-31, Top Gun Capt. Pete Mitchell (variation included). 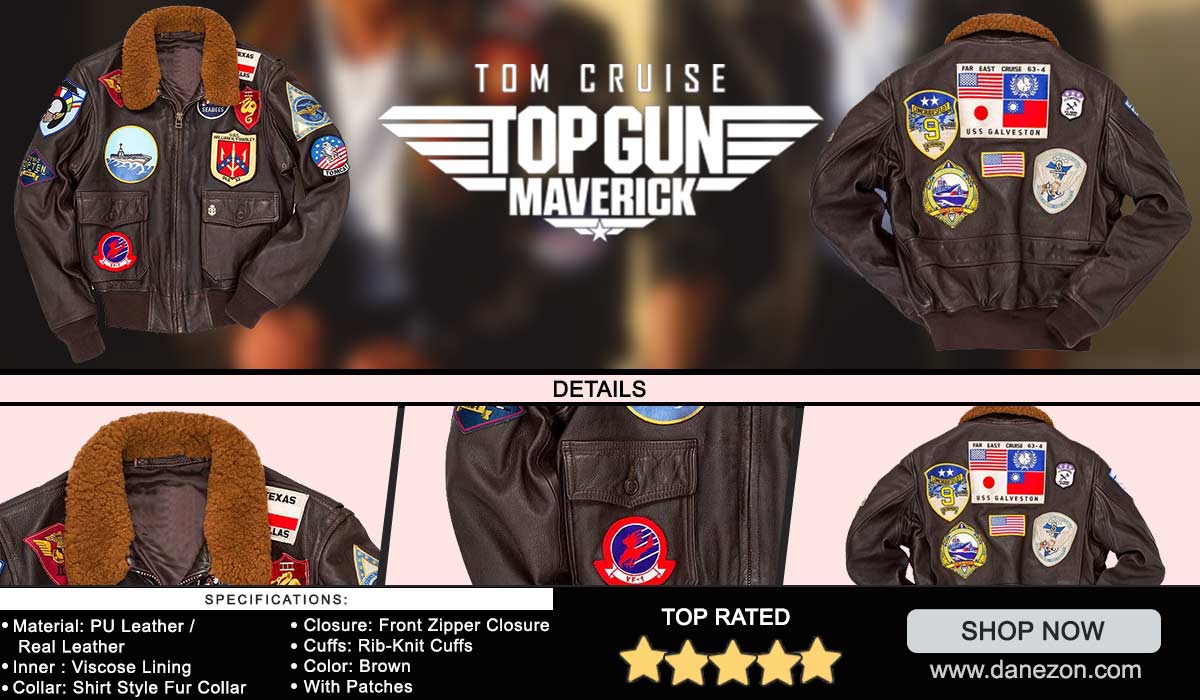