The presented The Walking Dead World Beyond Felix Jacket is the duplication of the attire that was worn by the character Elton in the TV-Series The Walking Dead: World Beyond. Initially, Felix used to live happily with his family but got kicked out after coming out to his parents. He survived hardly on the streets of the town. Further, Professor Leo then adopts Felix and accepts him. At the time of the outbreak, he was 20 years old, while he is unknown about the fate of his original family. He then managed to endure with the Bennett family. Later, he became the survival officer for the community at Campus Colony. He then met with one of the members of the community and developed a relationship with him. Nico Tortorella played the character of Felix.

The Walking Dead Beyond World Nico Tortorella Jacket is the creation of genuine quality leather fabric that is good enough for your comfort zone. You will see the soft viscose lining inside it, while the outside has a front zipper closure along with a stand-up style collar that is the unique feature of the jacket. Further, it has long sleeves open hem cuffs with its stunning Brown color. 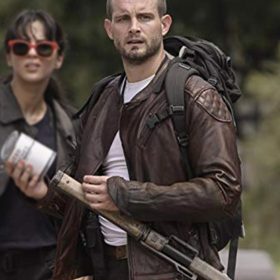