This Eudora Patch Jacket is a duplicate of the jacket that Eudora wore in The Umbrella Academy. In the series, Detective Eudora Patch first appears after the attack on Doughnut Shop when she investigates the crime scene. Further, while interrogating a suspect, Eudora then also learns that Diego has already interrogated her. She then also captures Diego and locks him up. We then also learn that Eudora was formerly in a relationship with Diego. When Diego asks her for help, she refuses. Later, she then agrees to help Diego due to which she attempts to call him, but he does not receive the call. She then also learns that Hazel and Cha Cha has captured Klaus. Eudora then goes to the motel by herself to rescue Klaus. In the end, while rescuing Klaus, Hazel shoots Eudora. Ashley Madekwe portrayed the character of Eudora. 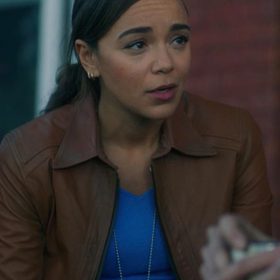