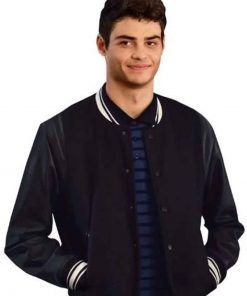 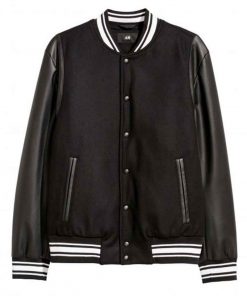 This Brooks Rattigan Jacket is an impersonation of the jacket that Brooks wore in The Perfect Date. In the movie, Brooks Rattigan is a senior at high school who dreams of getting into Yale against his father’s wishes to go to the University Of Connecticut. Brooks also works at a shop with a programmer best friend named Murph. As he finds it difficult to finance his dreams, Brooks gets an opportunity to make money by pretending to be the date of one of his classmates’ cousin named Celia. He then also meets Shelby and decides to win her. Brooks then also launches an app along with Murph, where he sells himself as a date for occasions. Further, Brooks, along with Celia, then also devises a plan to break-up with each other so that they can get along with Franklin and Shelby. When Murph begins to feel alone, he cuts off Brooks from his business. While pretending to break-up, Celia gets hurt from Brooks and slaps him. When Shelby asks out Brooks, Brooks finds it difficult to get along with Shelby. At the formal, when Shelby learns about Brooks’ app, Brooks reveals the truth to her, and she leaves him. In the end, Brooks reconciles with Celia and begins a relationship with her. Noah Centineo portrayed the character of Brooks.

This The Perfect Date Brooks Rattigan Jacket is a fabrication of the best-quality fleece fabric along with leather sleeves, and it features an inner stitched viscose lining to keep you comfortable. Its specifications accommodate a rib-knitted collar, rib-knitted hemline, rib-knitted cuffs, and front button conclusion.