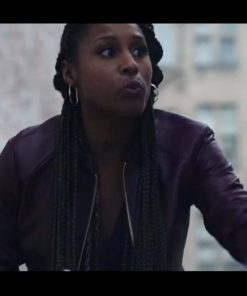 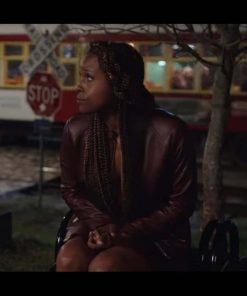 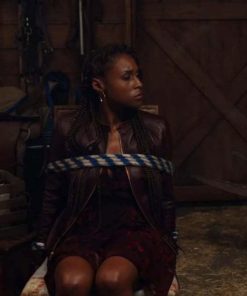 SKU: N/A Categories: Movies Jackets, Women Outfits, Womens Leather Jackets
Contact Us
Email us 24/7 and we will respond with in 12 Hours

This Leilani Leather Jacket is a facsimile of the jacket that Leilani wore in The Lovebirds. In the movie, Leilani is in a relationship with Jibran. One day, when Leilani is going with Jibran in a car, someone claiming to be a cop takes their car. Leilani then also witnesses as the man walks the car over the criminal. When nearby passer witnesses this, she suspects Leilani and Jibran for murder and reports the police. After escaping, Leilani then plans to catch the murderer with Jibran. She then goes with Jibran to catch the men responsible. Further, while trying to smash a glass door, Leilani then accidentally breaks her heel. Later, she then also goes to interrogate a teenager. However, along with Jibran, Leilani then goes to follow the murderer to catch him. Issa Rae performed the role of Leilani.

This Issa Rae The Lovebirds Leather Jacket is the origination of genuine leather to give it a ravishing charm. Also, the jacket consists of an inner stitched viscose lining to keep you comfortable and relaxed. In addition to that, the specifications of this jacket accommodate a round collar, open hem cuffs, and front zip fastening.