This Tony Johnson After Life Jacket is an impersonation of the jacket that Tony wore in After Life TV-series. In the series, Tony Johnson is a widower whose life gets upside down after his wife dies from breast cancer. He then also attempts to commit suicide but decides against it. He then decides to live longer to punish the world for the death of his wife by persuading them to do whatever he wants to do and also considers it as his superpower. Further, his workplace then hires a new recruit named Sandy. He then also attempts to get addicted. Tony then also babysits his nephew named George and begins to know Sandy. Later, Tony then also goes on a blind date which Matt arranges for him. In the end, Tony then appreciates everyone around him to not get depressed. Ricky Gervais portrayed the character of Tony.

This Ricky Gervais Jacket After Life is a fabrication of the best-quality cotton fabric and includes an inner viscose lining. Its specifications comprise of an erected collar, open hem cuffs, and front button closure; furthermore, two pockets at the waist are also available. 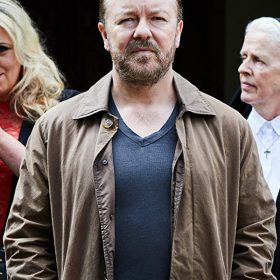