The indicated Mr Robot Hoodie is a facsimile of the hoodie that Mr. Robot wore in the TV-series. In the series, Elliot Anderson is a cybersecurity engineer who is also a vigilante hacker by night. Elliot also has an anxiety disorder due to which Elliot is an introvert. Further, Elliot also hates E Corp because of his father who develops Leukemia after he starts working at E Corp due to which Elliot translates it Evil Corp. He also talks with Mr. Robot who is a construct within Elliot’s mind. Mr. Robot is also the representation of Elliot’s dead father. He also has a personality disorder due to which he sometimes blacks out. Elliot uses his skills to help people and to bring the fugitives to justice. Rami Malek portrayed the character of Elliot Anderson.

This Elliot Anderson Hoodie is a fashioning of the cotton fabric, and it features an inner stitched viscose lining to keep you relaxed. Its specifications feature a hooded collar, rib-knitted cuffs, rib-knitted hemline, and front zip closure; moreover, two pockets at the waist are also present. 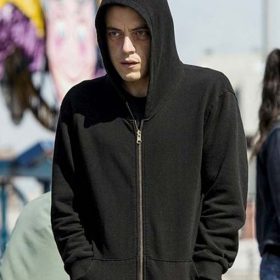