SKU: N/A Category: Power Book IV Force Merchandise
Contact Us
Email us 24/7 and we will respond with in 12 Hours

Rule the streets with power and panache in this Power Book III Marvin Black Leather Jacket from the popular TV Series Power Book III: Raising Kanan. This spectacular jacket is inspired by the one that was worn by the character Marvin. He is one of the main characters of the series.
In the series, Marvin Thomas is the brother of Raquel and Lou Lou and the uncle of Kanan. He is also the muscle of the family’s drug ring and has an aggressive personality. Actor London Brown played the character of Marvin.
► The indicated Power Book III London Brown Black Leather Jacket is formed from original leather.
► Also, there is an inner stitched viscose lining present in the jacket to keep the insides of the jacket soft and breathable for you.
► Other than that, its features involve a wide collar, buttoned cuffs, and a front zip fastening. 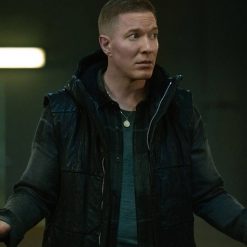