SKU: N/A Categories: Celebrity Jackets, Motorcycle Jackets, Winter Sale, Women Outfits
Contact Us
Email us 24/7 and we will respond with in 12 Hours

This Alicia Vikander Leather Jacket is an imitation of the jacket that Lara wore in the Tomb Raider film. In the movie, Lara Croft is the daughter of Richard Croft who disappears during one of his research. Lara then also discovers a secret chamber in her father’s tomb in which she finds a video of her father who asks her to destroy his research on Himiko. Lara neglects her father’s warning and decides to continue his research due to which she goes to Hong Kong. After Lara reaches to an island where someone knocks her out, and then she wakes up only to find Mathias who is also looking for Himiko’s Tomb. Lara then escapes from Mathias and also discovers her father who is alive. When Lara and Mathias realize about Himiko, Lara kills Mathias with the virus to stop him. In the end, after discovering about Trinity, Lara prepares for her next adventure. Alicia Vikander portrayed the character of Lara Croft.

This Lara Croft Jacket is a formation of genuine leather, and it also features an inner stitched viscose lining to keep you comfortable. Its aspects accommodate a peak lapel collar with depressed studs, straps on shoulders, belt on the waist for adjustment, and asymmetrical zip closure. The jacket also consists of multiple zipper and flap pockets at the front. 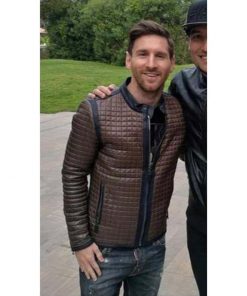