This Agent Tequila Kingsman Jacket is an imitation of the jacket that Tequila wore in Kingsman: The Golden Circle. In the movie, Agent Tequila is one of the Statesman Agents who captures Eggsy and Merlin when they attempt to hack into the Statesman Security System. When Eggsy and Merlin tell him about the Kingsman, he grows suspicious of them and after defeating them in a fight, he ties them to a chair. After Harry’s shooting, Tequila also saves him along with Ginger. He then also tells Eggsy and Merlin that Harry is alive and also reveals his current status to them. He then leaves them when Ginger enters the room and tells him about Eggsy and Merlin. Further, Agent Tequila then also gets infected with Poppy’s drug and even begins to dance in the hallway. When the Kingsman Agents release the antidote, he recovers. In the end, Tequila then also joins the Kingsman. Channing Tatum portrayed the role of Agent Tequila.

This Channing Tatum Denim Jacket is an augmentation of denim fabric, and it features an inner stitched viscose lining to keep you comfortable. Its specifications feature a shirt style collar, buttoned cuffs, and front button closure; moreover, two flap pockets at the chest, two pockets at the waist, and two inside pockets are also available. 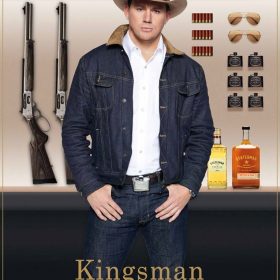