The indicated John Wick Leather Jacket is a replica of the jacket that John wore in John Wick. In the movie, John is a retired assassin who loses his wife and receives a puppy to deal with his grief. When Losef Tarasov steals John’s car and kills his puppy, John returns to the underworld to take his revenge from Losef. Viggo who is Losef’s father reveals that John was his assassin.  Viggo then attempts to sort out with John, but John refuses due to which Viggo sends a squad at John’s house whom John kills. Viggo then puts a bounty on John and offers to Marcus who is John’s mentor. In the end, after killing tons of Viggo’s henchman, John kills Viggo as well as Losef. Keanu Reeves portrayed the role of John Wick.

This Keanu Reeves Jacket is a production of the best-quality pure leather and comprises of a viscose lining present inside to make it soothing. Its specifications accommodate a shirt style collar, open hem cuffs, and front zip closure; furthermore, two inside pockets and two pockets at the waist are also present. 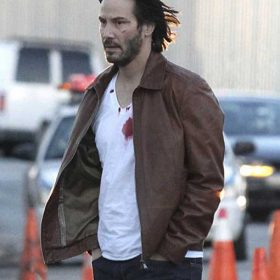