Aforementioned, Johnny English Bomber Jacket is a replica of the jacket that Johnny wore in Johnny English Strikes Again. In the movie, after retiring from MI7, Johnny works as a geography teacher and also trains his students to spy. MI7 then recruits Johnny for a mission. He then also asks MI7 to assign Bough on this mission. He then begins his investigation from where the attack happened. He then also goes aboard a yacht along with Bough, but an operative named Ophelia catches them due to which they escape. He then also begins to investigate Ophelia who then agrees to meet with Johnny. When Ophelia attempts to attack Johnny, he manages to escape from her due to a pill. He then also learns about Volta’s original plan. In the end, Johnny defeats Volta due to which the Prime Minister then also praises him. Rowan Atkinson portrayed the role of Johnny English.

This Rowan Atkinson Johnny English Jacket is a fabrication of genuine leather, and it comprises an inner stitched viscose lining to make it soothing. Its specifications accommodate a rib-knitted collar, rib-knitted cuffs, rib-knitted hemline, and front zip fastening. The jacket also includes two inside pockets and two zipper pockets at the waist. 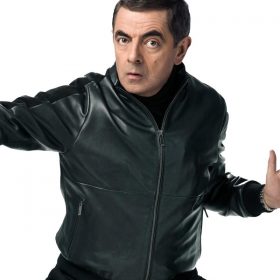