This Lyra Belacqua Fur Coat is an impersonation of the coat that Lyra wore in His Dark Materials TV-Series. In the series, Lyra Belacqua is the niece of Lord Asriel, who lives in Jordan College, Oxford. She also admires Lord Asriel for his research. Further, she also saves Asriel when the Master of Jordan College attempts to poison him. When Asriel goes on another expedition, Lyra stays with Mrs Coulter, who promises her that she will help her find Roger. Lyra then also goes to London with Mrs Coulter. After Mrs Coulter catches Lyra spying on her, she reveals that Asriel is Lyra’s father. When Lyra learns that Marisa is involved with the Gobblers, and she runs away with the Alethiometer and Pan, a Gobbler catches her. However, Gyptians rescue Lyra and take her to the Gyptian’s camp. Later, Lyra then also learns that Mrs Coulter is her mother. She then travels to the North with the Gyptians. During her journey, with the help of Coram, Lyra discovers her ability to read Alethiometer. She then also meets Iorek and convinces him to help her and the Gyptians in rescuing the children. When Lyra gets captured and arrives at the Gobbler’s base, she reunites with Rogers and the other children. She then destroys the base’s generator after defeating Mrs Coulter. After Iofer wins, he reunites Lyra with Asriel. When she meets Asriel with Rogers, he initially gets worried. In the end, after spending time with Rogers, Lyra enters the multiverse bridge. Dafne Keen portrayed the character of Lyra.

Travel through the enchanted lands with this Lyra Belacqua His Dark Materials Fur Coat , which comprises of original leather. Not just that, we have also provided a viscose lining, which is stitched inside to make it relaxing for you. In addition to that, its detailed specifications involve a fur hooded collar, shearling cuffs, and front button conclusions. So, just wear it and embark on your journey! 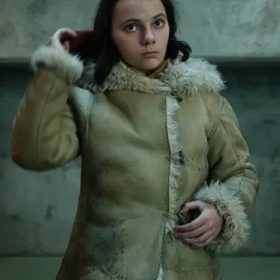