This Batman Gotham Jacket is an imitation of the jacket that Batman wore in Gotham TV-series. In the series, after Jeremiah Valeska isolates Gotham, Bruce along with Jim, Selina, Riddler, and Penguin look after the destroyed city. The situation then goes awry when Bruce learns about the surviving villains who have claimed their territories. Bruce then also visits a witch with healing powers to help Selina. Further, Bruce then also assists Selina in finding Jeremiah. Bruce then also learns about the arrival of Eduardo. Jeremiah then also kidnaps Bruce and recreates the scenario of his parent’s death. He then also throws Jeremiah into the chemicals when he attempts to throw Bruce. He then along with Alfred discovers a tunnel beneath the city. He then also faces Bane when Bane injures Alfred. He then also defeats Bane. He then leaves the city. Ten years later, Bruce then returns to Gotham for the launch of Wayne Tower. He then also adopts a new vigilante persona to protect Gotham. In the end, he stands over a building watching Gotham. David Mazouz portrayed the character of Bruce Wayne.

This David Mazouz Batman Jacket is an augmentation of high-quality PU leather, and it consists of an inner stitched viscose lining to keep you comfortable. Its specifications feature an erected collar, padded front, padded chest, zipped cuffs, Bat logo at the chest, and front zip closure. 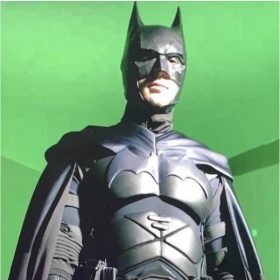