This Game of Thrones Dragonstone Jaime Lannister Black Jacket is an impersonation of the jacket that Jaime wore in Game Of Thrones TV-Series. In the series, Jaime Lannister is the brother of Tyrion Lannister and the son of Tywin Lannister. He is also the twin brother of Cersei Lannister. Unbeknownst to everyone, Jaime has an affair with Cersi. When Brandon Stark catches them, Jaime pushes Brandon to his death. During the battle of Whispering Wood, Robb captures Jaime. During his journey, Locke cuts off Jaime’s hand. Further, he then plays various important roles on different occasions. In the end, Jaime dies along with Cersi. Nikolaj Coster Waldau portrayed the character of Jaime Lannister.

This Jaime Lannister Black Jacket is a fabulous attire, which is an augmentation of high-quality PU leather. In addition to that, this jacket also includes an inner stitched viscose lining to keep you comfortable and relaxed. The specifications of this jacket feature a round collar, open hem cuffs, belt on the waist for adjustment, and front button closure. 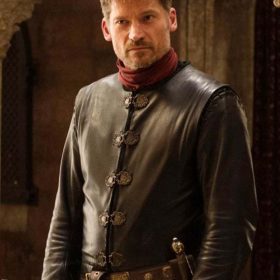