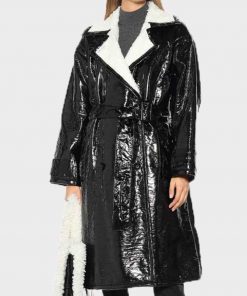 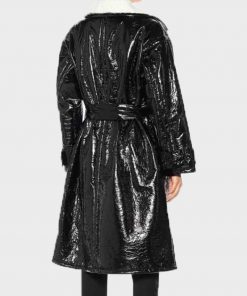 This Alexis Carrington Black Coat is a facsimile of the coat that Alexis wore in season 3 of Dynasty TV-Series. In this season, after marrying Jeff, Alexis returns to testify against Blake. Alex then states that she saw Blake murder Mack. After learning about the bullet, when Alexis arrives at the manor, Cristal confronts her due to which they fight. When Adam lives in her loft, Alexis manipulated him into joining her and Jeff to destroy Blake. Alexis then also survives the bomb attack. Alex then asks Adam to help Jeff. When Jeff refuses Adam’s help, Alexis gives him the drug. Along with Adam, Alexis goes to steal a liver. After Jeff asks her for divorce, Alexis attempts to make Mia look bad but fails. In the end, Alexis reunites with Jeff. Elaine Hendrix played the character of Alexis.

This Elaine Hendrix Black Coat is the production of the top-notch quality PU leather to give you a tantalizing sensation. Not just that, the coat also consists of an inner stitched viscose lining to keep you comfortable. In addition to that, the specifications of this coat accommodate a peak lapel shearling collar, open hem cuffs, and front belted closure.