This Jean Grey Coat is a duplicate of the coat that Jean wore in X-Men: Dark Phoenix film. In the movie, Jean Grey kills her parent as a child by using her powers. When Charles finds her, he blocks her memories and takes her to the Xavier’s School for Gifted Youngsters. Jean then also learns to control her powers and trains other children. Years after the events of Apocalypse, when Jeans goes on a space mission along with the other X-Men, she unknowingly absorbs an unknown entity named the Phoenix Force which also accelerates Jean’s powers. Further, when she attacks the children at the X-Mansion, Jean then begins to get afraid of her powers. When X-Men attempts to calm her, Jean kills Mystique and also injures Peter. Jean then also meets Vuk who manipulates her against the X-Men and uses her to destroy the entire world. When Jean embraces her powers, she begins to get darker and also defeats Erik when he arrives to kill her. Later, when Charles controls her, Jean feels regretful due to which she asks Vuk to take her powers. In the end, Jean fades into space after killing Vuk. Sophie Turner played the role of Jean.

This Sophie Turner Xmen Coat is a production of the high-quality cotton fabric, and it consists of an inner stitched viscose lining to make it soothing. Its specifications accommodate a peak lapel collar, open hem cuffs, and front button closure. 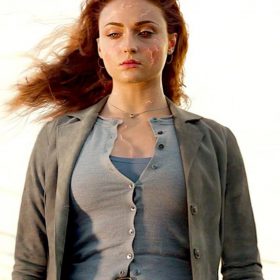