The presented Miles Finer Brown Jacket is a replica of the jacket that Miles wore in God Friended Me TV-series. In the series, Miles Finer is the son of a priest and Miles also runs a podcast. Further, Miles then also receives a friend request from an account named GOD who sends him friend suggestion of those people who are in need. Miles then helps a number of people who are also somehow connected to each other. Miles’ podcast then also becomes successful due to which his Miles’ sister convinces his father to support Miles. Later, Miles then also opposes his producer for changing the tone of the show due to which the show then also loses half of its audience. Miles then also attempts to crack GOD’s account but fails. In the end, Miles then along with Cara and other friends keep helping people. Brandon Michael Hall performed the character of Miles Finer.

This Brandon Michael Hall Suede Jacket is an origination of the best-quality suede fabric and features a viscose lining which is available inside to keep you relaxed. Its specifications feature a shirt style collar, rib-knitted cuffs, and front button closing along with zip closure. The jacket also comprises of two flap pockets at the chest and two inside pockets. 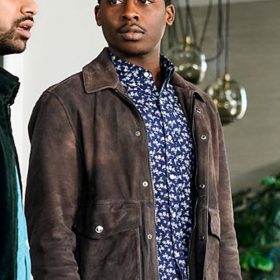