This Bob Marley Jacket is an imitation of the jacket that Bellamy wore in The 100 TV-series. Bellamy is one of the protagonists of the series. In the series, Chancellor Jaha’s political enemies manipulate him to assassinate the Chancellor in exchange for a position in Dropship. Bellamy was also not a part of 100, but he later became their leader. At first, Bellamy and Clarke struggled with each other, but they then settle their differences after Well Jaha’s death. During the war with Grounders, Bellamy also proved himself to be a skilled fighter. Bob Marley portrayed the role of Bellamy Blake.

This 100 Jacket is a formation of the high-quality cotton fabric, and it contains an inner stitched viscose lining to keep you comfortable. Its specifications accommodate an erected collar, padded shoulders, rib-knitted cuffs, rib-knitted hemline, padded front, and front zip fastening. 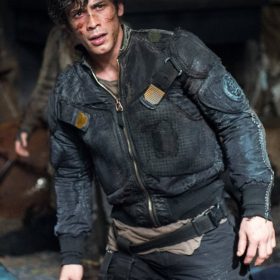