The indicated Black Mask Blue Blazer is an imitation of the blazer that Roman wore in Birds Of Prey. In the movie, Roman Sionis, also known as Black Mask, is one of the villains who rule over Gotham City after Batman’s disappearance. Roman owns a nightclub, where Dinah, who is his henchwoman, works. He also has a henchman named Victor Zsasz, who is a serial killer. When Roman sends Victor and Dinah to steal a diamond, a girl named Cassandra Cain steals it from them. While attempting to capture Cassandra, Roman’s path collides with Harley, Renee Montoya, and Huntress. He then attempts to kill them. In the end, Cassandra kills Roman. Ewan McGregor portrayed the character of Black Mask.

The presented Birds of Prey Black Mask Blue Velvet Blazer Coat is an augmentation of the top-notch quality velvet fabric. In addition to that, the blazer consists of an inner stitched viscose lining to keep you comfortable. The specifications of this blazer accommodate a peak lapel collar, open hem cuffs, and front button closing. 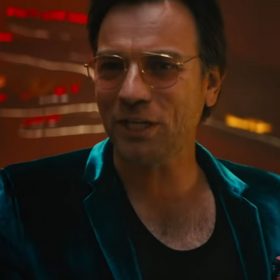