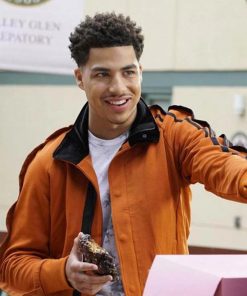 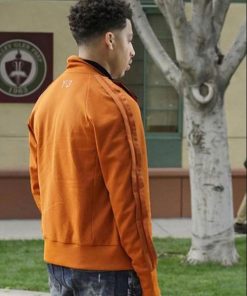 The indicated Black-Ish Andre Johnson Jr Orange Bomber Jacket is an imitation of the jacket that Andre wore in the Black-ish TV-Series. In the series, Andre is one of the main characters. Andre Johnson Jr. is the second oldest child of Andre and Rainbow. He is the older brother of Jack, Diane, and Devonte, while the younger brother of Zoey. Much like his brother, Andre Jr proves himself to not much intelligent on many occasions. Due to this, Andre Jr is mostly teased and mocked by Diane. Still, on many occasions, Andre Jr succeeds in impressing everyone with his skills. Marcus Scribner played the character of Andre Jr.

The presented Marcus Scribner Orange Cotton Bomber Jacket is an augmentation of the best-quality cotton/fleece fabric to give you a tantalizing sensation. Not just that, the jacket also consists of a viscose lining that is stitched inside to keep you comfortable and relaxed. In addition to that, the features of this jacket accommodate a shirt style collar, stripes on the shoulder, rib-knitted cuffs, rib-knitted hemline, and front button closure with zip fastening.