This Black Canary Denim Vest is a facsimile of the coat that Black Canary wore in Birds Of Prey film. In the movie, a few years after Batman’s disappearance, Black Canary operates as one of the vigilantes in Gotham City. While fighting crimes, when she learns that Black Mask is behind Cassandra Cain to capture her, Black Canary joins forces with Huntress, Rene Montoya, and surprisingly, Harley Quinn. When Roman’s gang chases them throughout the city, Black Canary goes to Harley Quinn’s lair along with the others. In the end, she forms a crime-fighting group with Harley Quinn, Huntress, and Rene Montoya. Jurnee Smollett-Bell performed the role of Black Canary.

Get a touch of empowerment with this sassy Birds of Prey Dinah Lance Blue Vest, one of the outfits of Black Canary from Birds Of Prey movie. This relinquishing masterpiece the production of the best quality denim fabric, and it contains an inner stitched viscose lining to keep you comfortable. Its specifications feature a neckline collar and front button conclusion. 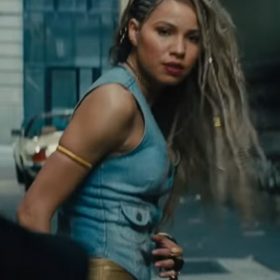