Annalise Keating How to Get Away With Murder Brown Jacket

Viola Davis How to Get Away With Murder Brown Leather Jacket

This Annalise Keating Brown Leather Jacket is a facsimile of the jacket that Annalise wore in How To Get Away With Murder TV-series. In the series, Annalise Keating is a teacher at Law School who first appears when she greets her students in the class. Further, she then also discusses a case with her students and while doing so, she then also gets to know a few students named Asher, Wes, Laurel, Michaela, and Connor. Further, she then also tasks her students to bring the best defense for the case. Annalise is also married to Sam. She is involved in a relationship with Detective Nate as well. Later, Annelise then announces Laurel, Wes, Michaela, Asher, and Connor as the winners and offers them to work with her at her firm. She then also wins a case with the help of her students. During the investigation of Lila’s murder, Annalise then also learns that Sam killed Lila due to which she gets into an argument with Sam and leaves her house. Later, she returns to her house only to find Sam dead. In the end, she agrees to help her student. Viola Davis portrayed the character of Annalise.

This Viola Davis Brown Jacket is an origination of the original leather along with a viscose lining which is stitched inside to keep you enjoyable. Its specifications accommodate a neckline collar, zipped cuffs, and front zip closing. 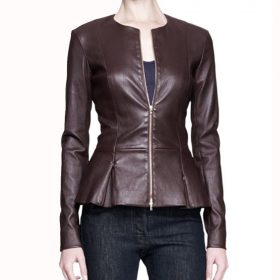 Annalise Keating How to Get Away With Murder Brown Jacket